Jetstar flies from Singapore to Osaka en-route Taipei or Manila. During my trip to Taipei, I boarded the flight bought for Osaka which transits at Taipei Taoyuan Airport.

With the recent implementation of self-check in and bag drop service at Changi Airport Terminal 1, it is a prelude to the experience of the fully automated suite of services offered by Changi Airport in the coming months at Terminal 4 – opening late 2017.

So I thought it might be worth while to do a short flight experience review. 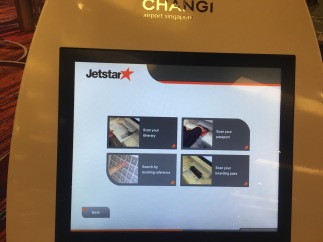 The future of automated boarding gates is already being set up. Similar to the one which will be used in Terminal 4.

The in-flight food selection on Jetstar is available via both pre-order when you first purchase the air ticket online as well as when you are onboard the flight. The difference is in the pricing when you book it online with the airfare bundle as it will come with an extra bottle of mineral water, apart from being served with coffee/tea.

While the world is advancing and the use of automation is inevitable. It does help streamline and lessen the reliance on human touch. That being said, it is still quite a while before full automation begins to take a bigger role in Singapore aviation industry. It sure has an impact on the way we travel. Maybe in future, we will no longer see Pilots or Air Crew on the flight. Being replaced by automation too – sounds too far fetched.

On the other hand, in-flight meals served on board budget carriers may appear to be less than tasty; accompanied with a lesser variety of drinks and no desserts or fruits/salad. It does, however, fills the tummy if you prefer to eat at the appropriate flight. Another factor that comes into play is the choice of flight time. It influences the decision whether to book a meal or factor in enough time to eat a decent meal before boarding the plane.

This site uses Akismet to reduce spam. Learn how your comment data is processed.